Treasure islands: the natural wonders of the Seychelles

Situated in the middle of the Indian Ocean, 400km northwest of Madagascar and over 1000km from the East African coast, the Seychelles is an ancient archipelago of 115 islands. While most travellers arrive trailing confetti and are content to just fly and flop on some of the world’s finest beaches, the islands possess natural wonders that hold far greater value. 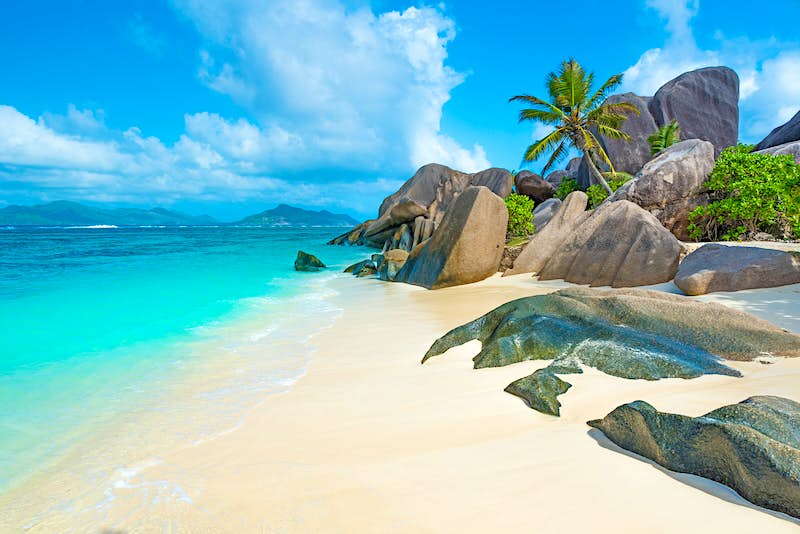 Thousands of years of evolutionary isolation have created this treasure map of miniature worlds in the Seychelles, each with its own unique biological capital and habitats found nowhere else on the planet. When General Gordon of Khartoum visited in 1881 he returned to London claiming he had found the original site of the Garden of Eden – specifically, the Unesco World Heritage-listed Vallée de Mai on the island of Praslin, where a prehistoric palm forest shelters the legendary coco de mer. 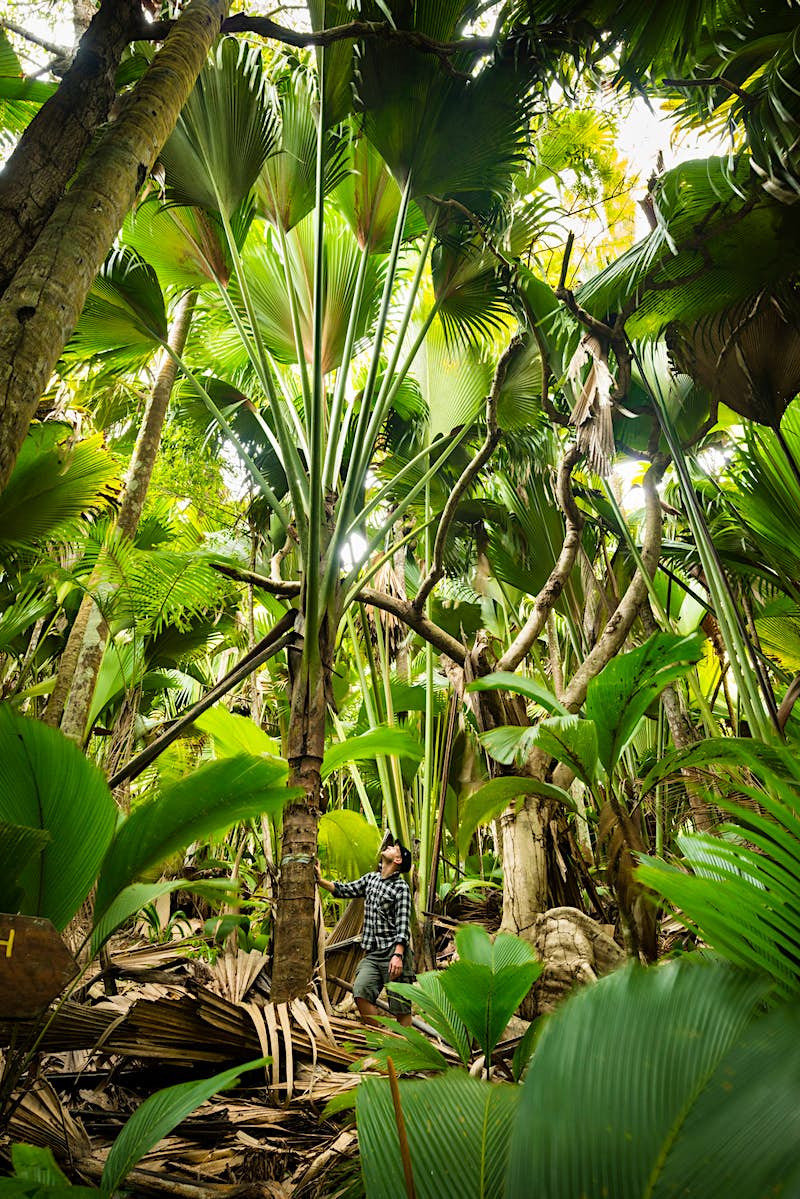 A walk through the valley is a surreal experience akin to natural time travel. Here everything is supersized and the silence is sepulchral, broken only by bird calls from rare endemic species like the black parrot and the crimson-crested blue pigeon. When a breeze blows, one can hear the rasp of giant fronds high in the canopy as the 20 to 30m-high palms sway like metronomes beneath the weight – up to 40kg – of their voluptuous, double-nutted coco de mers. You half expect a dinosaur to appear out of the Rousseau-like canvas. 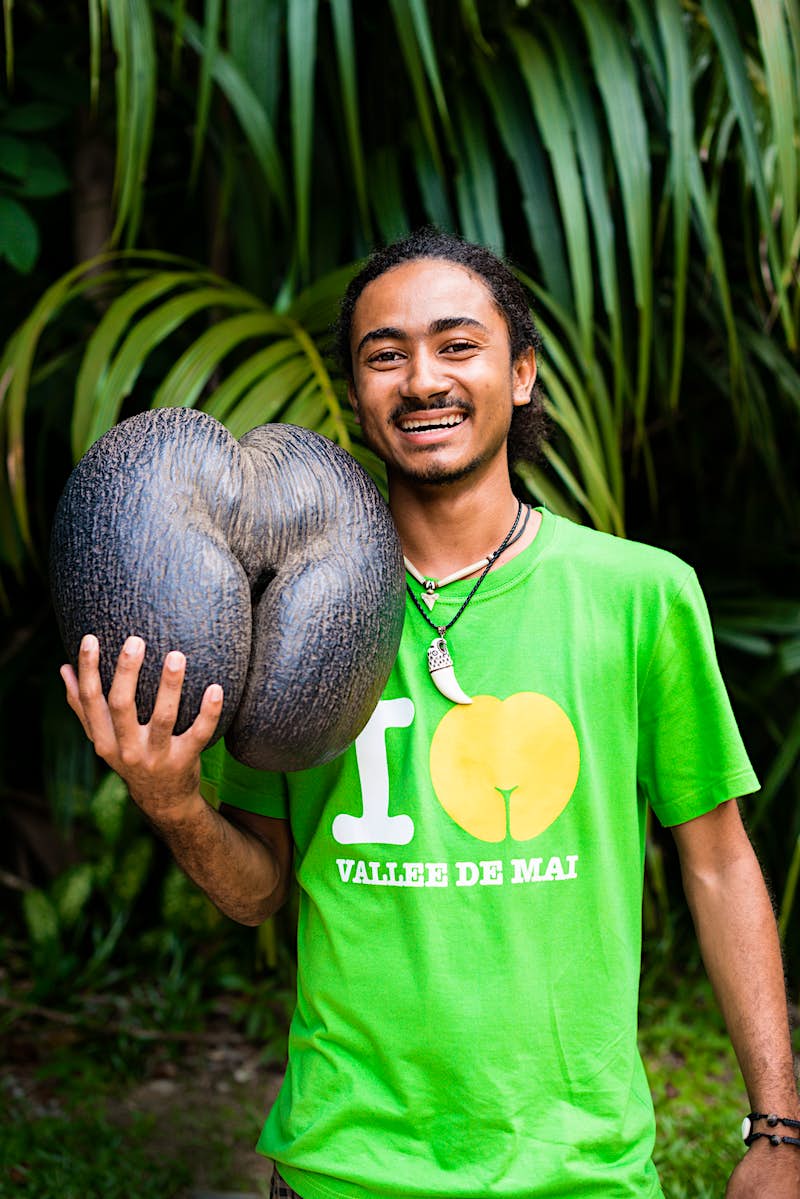 That the forest survives at all is a nothing short of a minor miracle. A second smaller indigenous forest on the nearby island of Curieuse nearly succumbed to 18th century botanical poaching, when the nut – worth its weight in gold at the time – was pillaged by British traders who subsequently set fire to the palms to ensure the highest price for their precious cargo. With its red soil largely laid bare the uninhabited island now provides a breeding centre for giant tortoises, which can weigh up to half a ton and appear like boulders beside the walking trails that crisscross the island. 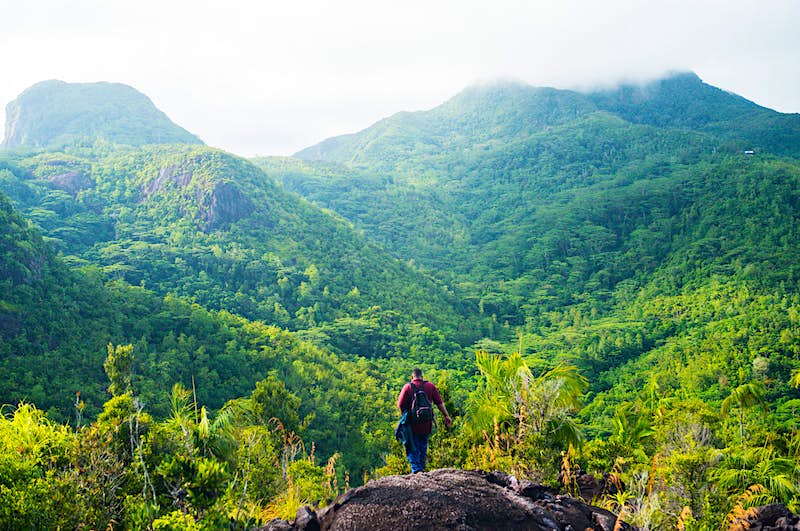 Other rarities fill the Morne Seychellois National Park on the island of Mahé. To find relict species you need to hike the signposted trails up to the peaks of Trois Frères, Copolia and Morne Blanc where screw pines and koko maron meet granite boulders sculpted by a millennia of rainfall on to which cling critically endangered jellyfish trees and carnivorous pitcher plants. It’s highly likely that Morne Seychellois is home to the total world population of both the jellyfish tree and bwa-d-fer, the ironwood tree of which there are just 40 mature plants left in existence. 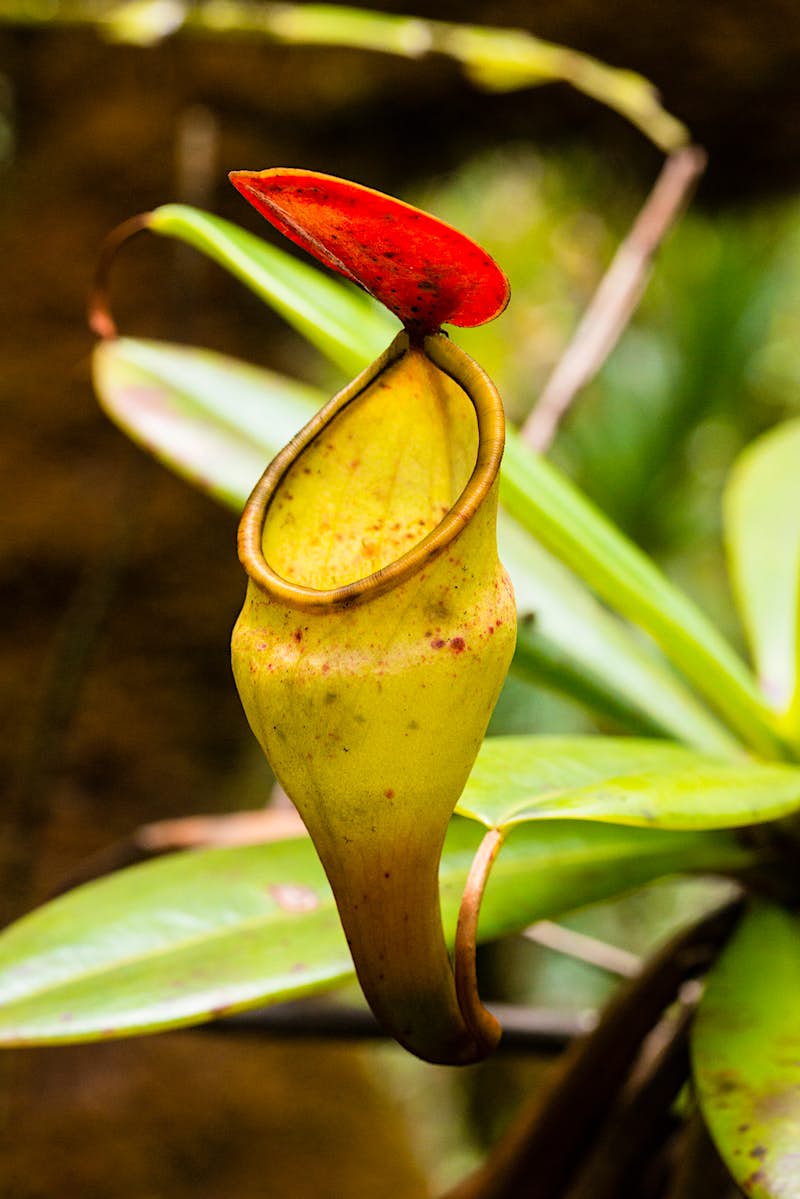 Dominating the view from the northwest of Mahé is the mist forest of pyramid-shaped Silhouette Island. The third largest island in the archipelago, it is considered a biodiversity hotspot with 93% of its area designated a national park and its surrounding waters a marine reserve. Most of the Seychelles 80 or so endemic trees and flowering plants can be found here along with the world’s only colony of sheath-tailed bats.

Pioneering ecological restoration in the Seychelles

The near natural state of the islands is thanks not only to their isolation, but stringent development controls. Aside from the 150 people who regularly reside on Silhouette, there are just two hotels. Awareness of the need to preserve the archipelago’s unique ecology has always been high here, but its becoming an increasing priority with new developmental and climate change pressures. As Dr. Frauke Fleischer-Dogley at the Seychelles Island Foundation explains, a key plank in the organisation’s new environmental thinking is the restoration of ecosystem integrity.

To see the success of this approach, you need only visit the island of Félicité. As part of their lease, the Six Senses have actively committed to restoring the ecology of the 264-hectare island. In order to do this, island ecologist Steve Hill has already spent nine years clearing invasive species such as coco plum so that endemic flora can re-establish itself and native fauna, such as the black paradise flycatcher, can return. Steve is even hopeful for the collection of ironwood saplings in his nursery. If he can nurture even a few of them to maturity, it will be an act of inestimable environmental value. 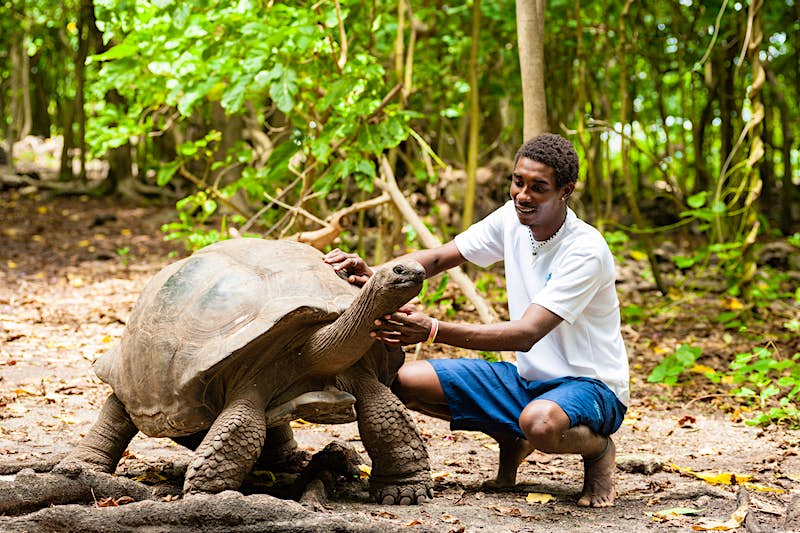 Steve’s bold promise that Félicité will be 'nature’s own island', is not a hollow boast given the work he’s already done on other islands such as Cerf and Frégate, the latter now home to the largest population of Seychelles magpie robins, fodies and blue pigeons, and the second largest population of giant tortoises – over 2200 – in the archipelago. Celebrities and royalty consider Frégate one of the world’s ultimate eco-hideaways. Who can argue with them when Robinson Crusoe was filmed here in 1988?

Other environmentally-minded island custodians such as the Seychelles Island Conservation Society, Bird Life International, Wilderness Safaris and Mason Travel have undertaken equally valuable restoration work on Aride, Cousin, North and Denis islands respectively. Take a trip to either Aride or Cousin and you’ll be amazed by woodlands thick with hundreds of thousands of land and sea birds, including the huge, oceanic stealth-bomber, the frigate. Beside the multitude of birds on Cousin, a globally significant population of Hawksbill turtles (subjects of the world’s longest running monitoring programme) heave themselves ashore between August and April to lay their eggs. 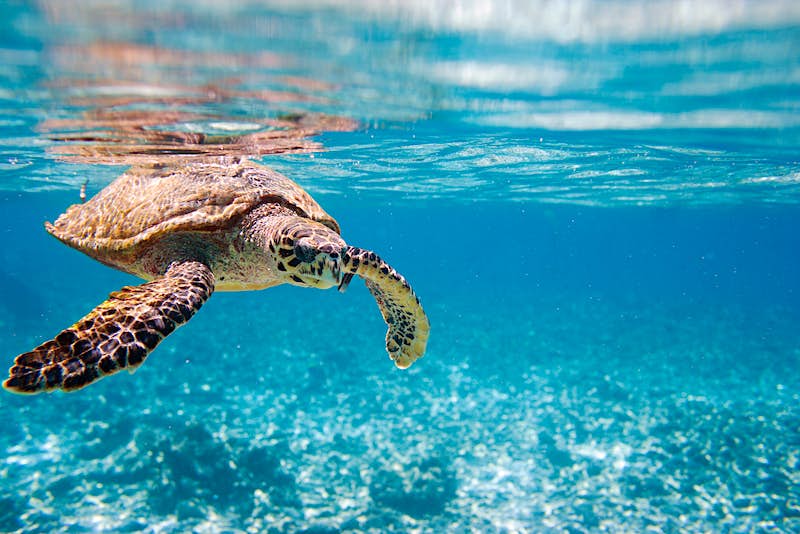 Already successful in creating parks and reserves on nearly half of Seychelles’ land area, the government are now working to protect 30% of the 1.3 million sq km marine territory. The brain corals, purple-lipped clams and giant cowrie shells threaded with brightly coloured fish around Curieuse and Île Cocos create underwater gardens every bit as beautiful as those on land. Hawksbill turtles are frequent visitors here, as well as on Denis Island, which sits at the northern end of the Seychelles plateau where the surrounding deep waters are dense with big game fish such as dog-toothed tuna and galatea.

But the marine spectacle of the inner granitic islands pales in comparison to the outer, coralline islands which lie scattered 250-1200km southwest of the Mahé. Here in an impossibly blue sea, surrounded by coral reefs and rich, warm currents, marine life abounds. The lagoon at the centre of St Joseph Atoll supports a huge population of stingrays as well as giant blue mud crabs. While Alphonse and St Francois are considered by many to offer the best saltwater fly fishing in the world – their waters are teeming with bonefish, milkfish, giant trevally, lemon sharks, tiger sharks and groupers so huge they can fit a man’s head in their mouth.

Most remote of all is the almost mythic island of Aldabra, an island of such environmental value that it forms a baseline for scientists and conservationists around the world who visit to see what the world once looked like. Here the marine biomass is an extraordinary six tonnes per hectare, as opposed to the half-tonne that is present in the marine reserves around Mahé, and the island is the only place on the planet where reptiles – over 150,000 giant tortoises – still dominate the ecosystem. A brass plaque, installed in 1982, when the atoll was finally recognized by Unesco, provides a fitting accolade: 'Aldabra, wonder of nature given to humanity by the people of the Republic of Seychelles'.